Jimminy and the Magic Book 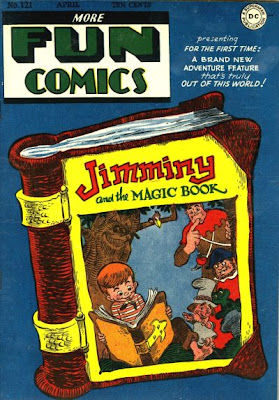 MORE FUN COMICS was incongruously one of DC's bloodiest and most violent comics during the peak World War II years. The sometimes almost sadistic adventures of Jerry Siegel's SPECTRE could be found here along with those of DOCTOR FATE and later JOHNNY QUICK, AQUAMAN and GREEN ARROW. After the war, however, trends changed and these features all faded away or moved into other titles leaving MORE FUN COMICS once again...fun!
In 1947, beginning in issue 121 of the long-running title, we find the first appearance of JIMMIN

Y AND THE MAGIC BOOK. A forgotten traesure of a series, it chronicles the whimsical adventures of a little boy named Jimminy Crockett and a book of fairy tales, myths and legends he finds in his attic. The book, you see, can bring things in it to life! Unfortunately, real-life fairy tale characters are not always a good thing and Jimminy is warned by his father--who had enjoyed the book before him--to always keep his wits about him.

For seven issues--the final seven issues of the title--Jimminy has adventures with pirates, polar bears, talking animals, trolls, kangaroos and even discreetly topless mermaids(!). All of this is presented in beautifully drawn and colored pages by artist Howie Post. To say that Post's work is reminiscent of Walt Kelly would be an understatement. Although his own developing style shows through at times, for muc

h of the run even a reader very familiar with Kelly might swear this was him. In fact, in a COMIC BOOK ARTIST interview a few years ago, Post tells the story of how Kelly and Dell comics honchos picked him to ghost the successful POGO comic book after Walt had moved on to the syndicated daily POGO strip. Unfortunately, he found he could make more money continuing to work for DC so that never happened. Aft

er Jimminy, Howie Post continued to work under the radar in comics, returning to a bit of prominence in the late sixties with the short-lived but well-remembered ANTHRO. After that he moved into newspaper strips himself with THE DROPOUTS.

According to GCD, all of the appearances of JIMMINY AND THE MAGIC BOOK were written by Jack Mendelsohn, a writer/artist who later created the bizarre syndicated strip JACKY'S DIARY and even later was one of the credited writers on the Beatles' animated feature YELLOW SUBMARINE.

If one is mining for undiscovered gems in DC's back catalog, I'd put this one up with SCRIBBLY as one that deserves a trade paper reprinting. Unfortunately, I'd also put this up with SCRIBBLY as something we're not likely to have see the light of day in the current comics market. Sigh. Look for cheap back issues of MORE FUN #'s 121-127 at your local comic shop. Since there are no costumed heroes in them, you might be able to find good deals.

The covers seen here are from the entire run and come from GCD. Note Superman's cameo on one issue!
Posted by Booksteve at 9:11 AM