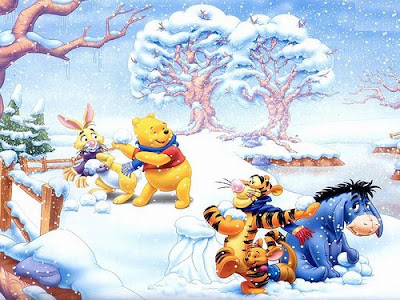 Today is WINNIE THE POOH DAY! January 18th was established as a time to treasure Pooh Bear and all his friends as it was the birthday of his creator, A.A. Milne.

I never heard of Pooh as a child until 1968 when Disney's WINNIE THE POOH AND THE BLUSTERY DAY premiered with the feature THE HORSE IN THE GRAY FLANNEL SUIT. I was nearly 10 years old and into action, gunplay and explosions in my entertainment but the Disney brand still carried some weight with me so I'd gone and I was absolutely delighted! The feature was rather forgetable but the short was amazing! It was lovely, leisurely, whimsical and perfectly voiced by a cast (the great Sterling Holloway as our hero) who would, for the most part, stick with the roles in movies and on TV until their deaths!

When my own son was born, I bought him the real thing (as opposed to the Disney version) but I can't help thinking I was buying it as much for myself as for him! He loved it, I loved it. If there's a child in all of us then that child will surely be a better person for knowing WINNIE THE POOH. Happy Pooh Day! Have some honey and then go out and make someone smile!
Posted by Booksteve at 8:38 AM