This is Today on NBC 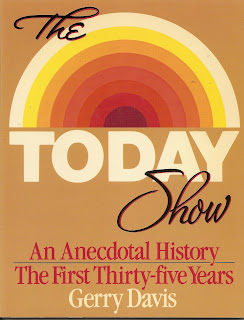 Today is another anniversary! This time, it's literally TODAY! NBC's TODAY, the legendary brainchild of Sylvester "Pat" Weaver in 1952. Over the decades it has become the standard for morning news and info programs but in my peak TODAY-watching years, I always thought of it as just a different type of sitcom. Let's see, you had Tom Brokaw as the stern father, Jane Pauley the young, beautiful and classy wife, Willard Scott as their misbehaving boy, Bryant Gumbel as Eddie Haskell and Gene Shalit as Uncle Fester. Some episodes were serious but there was usually a good deal of banter going on as well as sometimes some downright feuding!
Over the years both before and after that particular crew, from Dave Garroway and J. Fred Muggs (a chimp) to Meredith Viera and Matt Lauer, it's been a friendly, accessable and familiar place to wake up every morning. In the seventies, it was copied by GOOD MORNING AMERICA and more recently FOX AND FRIENDS and a dozen others have tried to clone it but Pat Weaver's baby just keeps going. Hmmm...makes you wonder why a man named Sylvester, who simplified his own name to Pat and came up with the basic title, TODAY...would name his daughter Sigourney.
This too-thin oral history compiled by Gerry Davis came out for the thirty-fifth anniversary back in 1987. Lots of great stories and pictures! It's long out of print but check your local libraries and used book stores. If you're any kind of news junkie, you owe it to yourself to learn the history of TODAY.
Posted by Booksteve at 9:30 AM