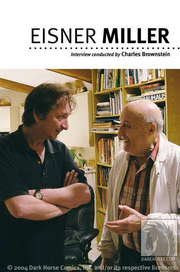 Okay, I finally saw THE SPIRIT and in spite of my attempt at an open mind, I have to say it's just about as bad as nearly everyone said it was. Dark (and I mean actually dark. Not just the subject matter!), confusing and dreadfully slow in spots. Surprisingly camp, pointlessly (and awkwardly) rewritten from the original concepts and with a number of blatant "in-jokes" so "in" that only aging fanboys would get them. You know...the kind of fanboys that director Frank Miller was cussing out in this month's MAXIM saying he refused to cater to them/us!
The music is good...but there are long periods where it never stops for a second and drowns out what may or may not have been important plot points! The strategic use of color in what should at least have been an enjoyably stylized CGI setting (but for some reason seems annoying here in a way that never happened in SIN CITY) is the only aspect I completely liked.
The bottom line for me is not that it isn't Eisner's vision. While I still feel that could have made a decent film, it will be a long time now before anyone else is given the chance. No, the bottom line here for me is that it isn't a cohesive vision at all! Talented comic book creator that he is, Miller seems to have risen to his level of incompetence. The Peter Principle in action. Friend Lisa likens it to a Fred Olen Ray production, the difference being that Fred makes films that look like this on thousand dollar budgets while Frank had millions here! You just don't see it. With Fred, you praise what he was able to accomplish. With Miller you wonder where the money went.
The acting here is abyssmal with every single person throwing away badly written lines time and again as if they just didn't care...especially our supposed hero! Actual performances are virtually non-existant. At least Sam Jackson seems to be having fun as the villain. I can't help but think he grew up--comics fan that he is--wanting to be a guest villain on BATMAN and viewed this as finally his chance. What's obviously fun for him, however, is often gratingly over the top to us as viewers.
The one time I ever saw Frank Miller in person was when SPIRIT creator Will Eisner was giving him an award. I can't help but think the late elder statesman of comics might wish to take it back right about now!
Which brings us to BUCK ROGERS. The rumors on the Internet h 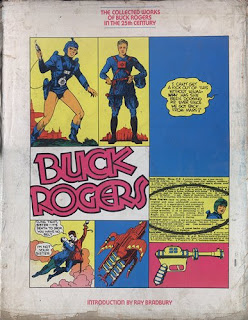 ave had Frank wanting to direct BUCK ROGERS for some time now and most recently the deal seems to have been finalized. I have no idea whether Miller intends to remake the seventies TV series or to just go back to the original 1920's source material. Either way I hope we never see this movie come to pass. In its pulp incarnation, its long-running comic strip and the early Buster Crabbe movie serials, Buck has always shown an upbeat, positive future. In spite of wars and would-be conquerers, all of the various versions emphasized the triumphs of science and reason over madmen and monsters. I shudder to think what Frank Miller's "VISION" of the future with Buck Rogers will be.
I enjoyed Frank Miller's early DAREDEVIL run and consider his second run on the book (as writer only) to be one of my all-time favorite comics runs. The first DARK KNIGHT series is a classic and I even enjoyed RONIN! Since those early days, however, he seems to have gotten it into his head that his "vision" trumps all others. Somebody needs to show him some toughlove and tell him he's wrong.
Posted by Booksteve at 4:30 PM