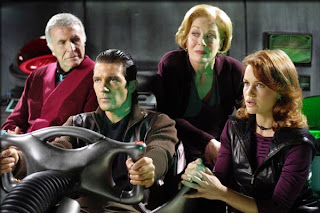 Not even halfway through January and we've lost a lot in the entertainment field already. The latest exit is Ricardo Montalban. I first noticed him in 1973's ESCAPE FROM THE PLANET OF THE APES as the compassionate circus owner who shields baby Milo. At that point, I had yet to see all of the classic STAR TREK episodes and thus had not been introduced to Khan. Suddenly, I saw Mr. Montalban everywhere on television, in commercials and in movies. By the time FANTASY ISLAND premiered in the late 1970's, I was very familiar with his mellifluous voice and classy demeanor and tuned in weekly not so much to see the guest star turns as to see him (and sidekick Herve'). In the early 1980's, he surprised me when he seemingly effortlessly walked away with STAR TREK II: THE WRATH OF KHAN, overacting rings around legendary scene-chewer William Shatner as Kirk. Although endlessly parodied ever since, it proved an unexpected showcase for the veteran actor's range. Montalban had, in fact, been around Hollywood for many years in mostly small roles. He was reported to have a severe back injury which he downplayed as much as possible. He was also an activist in Hispanic movements. In more recent years, in spite of being wheelchair-bound,he became familiar to children in a great role as the CGI fighting Grandfather in the underrated SPY KIDS 3 (seen above) as well as voicing the evil Senor Senor, Sr on Disney's KIM POSSIBLE series. If it weren't such lousy weather in parts of the country (including here) tonight, I'd suggest we all go outside at midnight and yell, KHAAAAAAAAAAAAAAAAAAN!" at the moon in tribute. Sigh. Thank you, sir. We'll miss you.
Posted by Booksteve at 8:22 PM