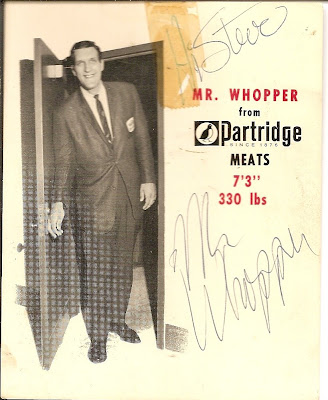 Somedays it just isn't easy to give a simple answer to a simple question. On this blog alone, I've pointed out that my first autograph was from Stefanie Powers...and Karen Valentine...and Forrest J. Ackerman. Well...that's all true...in a way. My first celebrity signature was on a letter I received from GIRL FROM U.N.C.L.E. Stefanie Powers in 1973. My first autographed picture was from ROOM 222 actress (and latter-day Gidget) Karen Valentine about a year later. Somewhere in there I also recieved a signed sketch of FJA...only it was signed "The Ackermonster."

Digging back even further into the archives, we find this which supercedes all of those by up to a decade! The only thing is I'm pretty sure "Mr. Whopper" was not HIS real name either. He was a particularly big man hired to shill for Partridge Weiners (home of their own pre-Burger King "whopper") in the Cincinnati area in the mid-sixties. I remember seeing him on TV a lot and at some point my dad ran into him at a supermarket promotion and got this autograph card just for me!

Anyone out there know anything else about this guy? Real name? History? Whatever happened to him? I'm sure I'm not the only one he signed one of these cards for in his day.
Posted by Booksteve at 10:50 PM