On the Real Side by Mel Watkins 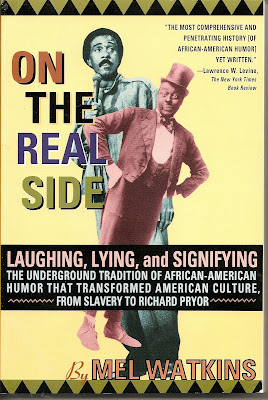 One of the cultural historians interviewed in the PBS FUNNY BUSINESS documentary we wrote about yesterday was Mel Watkins, author of the book seen here. As the definitive history of black entertainment in America, ON THE REAL SIDE serves as almost the other side of the story to yesterday's GOING TOO FAR, filling in the blanks as to what was happening in comedy not based on a primarily Jewish background.

Starting with the minstrel shows and Bert Williams and heading along through the stereotype actors of early Vaudeville and Hollywood such as Stepin Fetchit, Willie Best, Mantan Moreland and then headlong into Redd Foxx, Slappy White and Moms Mabley before reachingBill Cosby, Richard Pryor and beyond.
My wife's late father was a scholarly physician, one of the first to be involved in a human hand transplant in the late sixties. According to my mother-in-law, he was also a big fan of African-American nightclub comics and, in fact, became acquainted with the likes of Foxx and Mabley.
Watkins is scholarly and yet immensely readable as he unfolds the tales of triumph and tragedy unflinchingly and continually melds them into the bigger social picture. In fact, he's so good and has such an impressive background that I'm going to blame a rather blatent mistake (which was NOT fixed between hardback and paperback!) on a less informed proofreader rather than on him. The mistake? The recently deceased Rudy Ray Moore (DOLEMITE) was a star on so-called "party" records in the seventies as well as in a number of comedic blacksploitation movies. As a middle-American white kid, even I knew that at the time and yet the book, although barely mentioning him at all, consistently refers to him as RUBY Ray Moore and as "she!" I'm thinking Mel knows better.
Again, a required book for any true student of comedy.
Posted by Booksteve at 8:14 AM