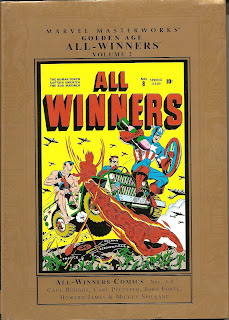 Here's my present from my lovely wife. Rather than tell me it's time to grow up and give up comics, she indulges me with this MARVEL MASTERWORKS collection of comics even older than me! And she got it at half price! Lots of cool Golden Age stuff here including some actually signed text stories by none other than Mickey Spillane! The biggest revelation to me came in one story where we see that the awkwardly named WHIZZER has a little-known sidekick! "Slow Motion" Jones is a "dese" and "dose" stereotype of the worst proportions! Perhaps that's why in a later issue also reprinted therein, he seems to be replaced by none other than...Raffles, the (retired) Master Cracksman himself! Add in the Torch and Toro burning Nazis, Bucky machine-gunning Nips (sic) and ol' post-Everett triangle-headed Subby and this collection is just alot of violent and otherwise inappropriate, politically incorrect fun for the collector! Thanks, sweetie!
Posted by Booksteve at 8:40 AM