Going Too Far by Tony Hendra 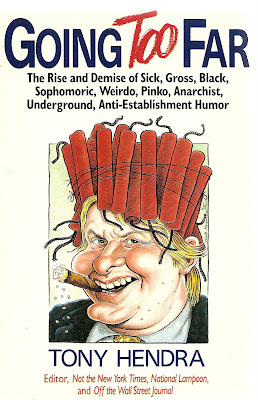 Last night, I watched one of the hours of the currently running PBS documentary, FUNNY BUSINESS, that dealt with the cutting edge comics of the fifties, sixties and seventies. This reminded me of this informative 1987 book by Tony (THIS IS SPINAL TAP) Hendra on the so-called "sick" comics and their spawn. Himself a former NATIONAL LAMPOON editor and author of a number of very funny parody books, Hendra knows his stuff and does a nice job tying Lenny Bruce and Mort Sahl to Bob Newhart, Bill Cosby, SATURDAY NIGHT LIVE and beyond. Since comedy cannot exist in a vacuum (it's a scientific fact!), he also discusses the political and cultural climates of the decades, the influence of MAD, underground comix and later, NATIONAL LAMPOON. In fact, the one qualm I have with the book is that it devotes what I consider TOO much space to NATLAMP. Even then, though, Hendra's personal insights make that section must reading for anyone wanting to understand where today's uncensored comedy atmosphere was wetnursed. A goodly amount of illustrations and a more than passing look at pivotal and influential parodists, satirists, standups and other cultural observers including The Smothers Brothers, Woody Allen, Shelly Berman, Buck Henry, Michael O'Donoghue, Jules Feiffer, Robert Crumb, Nichols and May, the Committee, Second City, Godfrey Cambridge, George Carlin and the Not Ready For Prime-Time Players make this long out-of-print volume a must-read for pop culture comedy fans.
Posted by Booksteve at 6:38 PM