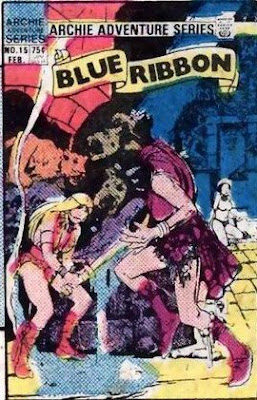 Ever wonder what might have been? Well, here's a brief glimpse. In 1983, Archie Comics revived its superhero line in a fairly big way, bringing back THE MIGHTY CRUSADERS as well as various related titles including a new version of the classic wartime title, BLUE RIBBON COMICS. This whole revival was interesting with the initial burst seemingly spearheaded by artist Rich Buckler and later eclectic writer/publisher Robin Snyder (with crazy DC vet Robert Kanigher running around doing his own thing!). BLUE RIBBON was more or less an anthology, spotlighting tales of MISTER JUSTICE, THE FOX and other revived heroes along with unexpected appearances by the T.H.U.N.D.E.R. AGENTS, Martin Greim's THUNDERBUNNY and a brand new character called AGENT NEPTUNE (who may or may not have been U.N.D.E.R.S.E.A. AGENT. I didn't get that issue). Never really finding its groove, the line was terminated rather abruptly as there exist nearly full unpublished stories of some of the characters.
Here, however, we see a glimpse of what was to have been-The unpublished BLUE RIBBON COMICS # 15. Hard to tell from this sword and sorcery looking cover but the lead feature was supposedly going to be CAT GIRL, another new character as far as I know. Art LOOKS like maybe Ernie Colon. Nice to know that right up to the end, they were experimenting! In retrospect, though, probably not a good idea when your whole line is floundering.
Posted by Booksteve at 5:22 AM