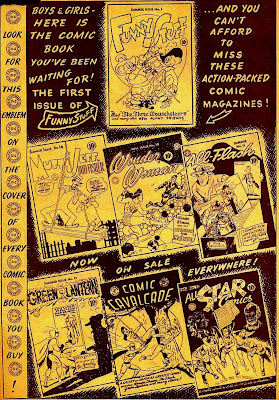 FUNNY STUFF # 1 heralded the end of the reign of the superhero at DC Comics in the 1940's. Before long, humor became a staple of the company--along with westerns, radio adaptations, sci-fi and anything else that might launch a trend--and the Golden Age heroes were slowly put out to pasture after the war leaving only Superman, Batman and Wonder Woman. There really wasn't that much time between the end of the Golden Age and the beginning of the Silver--only a few short years. Still, DC kept its funny animal comics going almost until 1970 with FOX AND CROW (having long outlived their screen inspirations!) and even then there were revivals of sorts into the eighties! The Three Mouseketeers seen here even turned up again!

In this ad, note the ubiquitous MUTT AND JEFF strip reprint title referred to as "action-packed." Before long, ALL-STAR would become a western title and COMIC CAVALCADE a funny animal title.
Posted by Booksteve at 11:30 PM