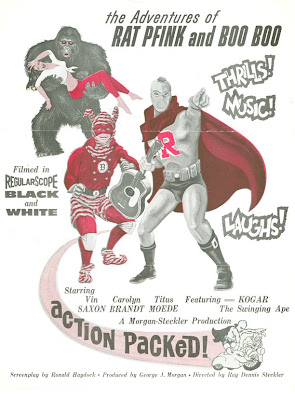 Ace researcher Derek Tague tips me on the passing of legendary low-budget filmmaker Ray Dennis Steckler. Best known for his sixties films RAT PFINK A BOO-BOO (sic) and THE INCREDIBLY STRANGE CREATURES WHO STOPPED LIVING AND BECAME MIXED UP ZOMBIES!!?, he was actually rather prolific and continued directing until relatively recently. His movies were cheap but one had to admire the talent and tenaciousness involved in getting them completed and released. Sort of a more successful Ed Wood if you will and no doubt an inspiration to indie filmmakers over the last few decades.
Posted by Booksteve at 7:42 PM