Movies That Fell Through the Cracks # 46 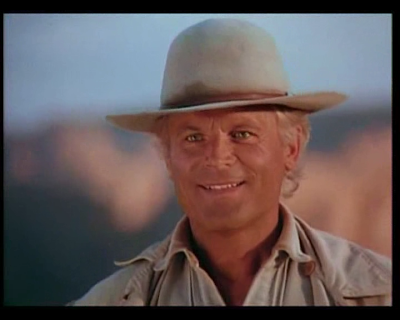 Students of international comics all know that LUCKY LUKE is one of the most successful European comic strips of all time, created by Belgian cartoonist Morris in 1946 and guided through its peak years by ASTERIX writer Rene Goscinny. In spite of the fact that it's set in the American west and quite amusing, LUCKY LUKE has never quite caught on in the US. That hasn't stopped the series from running more than 60 years, with more than 70 graphic novel collections, several hit animated films and, in 1991, a live-action feature film! 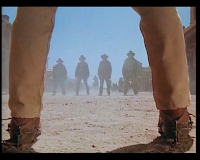 LUCKY LUKE, the movie, although virtually unknown in the USA is immensely fun! International superstar Terence Hill (THEY CALL HIM TRINITY, MY NAME IS NOBODY) brings a charm and warmth to the character and the film that goes a long way toward making up for the fact that visually, almost everything about the character was changed! Shot in New Mexico with a mostly American cast, the picture tells the story of the founding of Daisytown and an attempt by the Dalton Brothers (as played they're quite reminiscent of Carl Barks' Beagle Boys!) to take it over by turning the townspeople and the local Indian tribes against new sherrif Luke. All of this is narrated by Luke's white horse, Jolly Jumper! As voiced by singer Roger Miller, it makes it sound similar to his narration of Disney's ROBIN HOOD! Miller also does the catchy opening theme with Arlo Guthrie (of all people) singing over the closing credits!
Hill is easygoing with a winning smile as he always is, here letting the fact that his character doesn't talk too much cover his not-as-bad-as-it-once-was Italian accent. John Ritter's then-wife Nancy Morgan seems surprisingly seasoned as sexy Lotta Leggs. 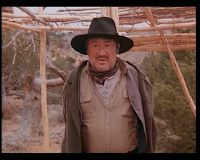 BARNEY MILLER's Ron Carey, also a former Mel Brooks cohort, might seem more than a little miscast as Joe Dalton but he plays it to the hilt and has some winning scenes as the nebbishy outlaw leader. The actors playing his brothers (as well as the ones playing the indians) all have some genuinely funny, family-friendly scenes in this live-action cartoon. 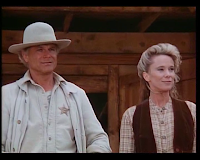 Never heard of it? Well, somebody did. LUCKY LUKE spawned a sequel and two seasons of TV episodes shown in Europe, all of which featured Hill, Morgan and most of the same cast! A few years back, the TV episodes could be had for a buck on VHS at Half-Price Books but now they're going for a premium on Amazon and EBay.
Posted by Booksteve at 11:30 PM