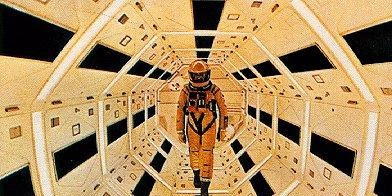 Every decade or so I give it another try. Thus, for what was probably the fourth time ever last night, I started watching 2001: A SPACE ODYSSEY—one of the most disappointing films I’ve ever seen. You have to remember that this thing came out in 1968, the year Apollo 8 finally took man to the moon (although they wouldn’t land until Apollo 11 the following year). STAR TREK was still on the air! Kids my age were into all things space and science was, at least for awhile, as hip to us as meditation, be-ins and free love were to our older siblings. I sat in the front row of the Madison Theater in downtown Covington with my friend Terry for nearly an hour before the first weekend matinee showing of 2001…and I have never been so disappointed.

The film became an international sensation and later a cult film to the turned on generation but I just didn’t grok it, y’know? I had no problem with hardcore sci-fi in books and magazines but the appeal of this one just missed me. I mean, seriously, after the admittedly classic (and endlessly parodied) opening bit, what have you got. A slow hour where literally nothing is really explained to us as an audience and where the lead character is pretty much abandoned in favor of an equally slow second half featuring two astronauts 18 months later. There’s a lot of pretty but incongruous classical music and some striking but static visual shots that you just want to run in fast motion. Were there ever two actors blander than Gary Lockwood and Keir Dullea? Yes, some of the interplay with HAL9000 is interesting and well-played but it’s still drawn out and confusing. And that ending? To say it’s left open to interpretation is putting it mildly.

I tried reading the book. I tried reading the book on the making of the film. I bought every issue of the Jack Kirby comic! Nothing helped. I tried other Kubrick films and found even the best of them slow. How one can make Nicole Kidman being naked in EYES WIDE SHUT boring is beyond me. And why would one do that? I sometimes feel like 2001 is “the emperor’s new clothes” and that no one really wants to admit that there’s nothing really there but a pretty package. But then I remember that I said the same thing about 3-D and last year THE NIGHTMARE BEFORE CHRISTMAS proved me wrong after 45 years so I keep trying with 2001. So I tried and failed again last night. Today, my generally quite perceptive friend Cassandra said it was one of her favorite films. Guess I’ll give it another try in about ten years.
Posted by Booksteve at 8:38 PM