Superman Vs the Magic Snake-1983 Ad 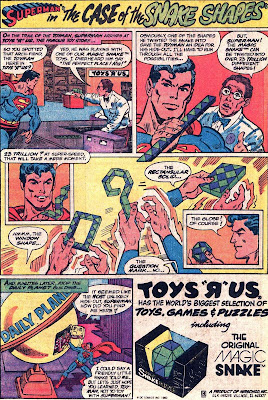 Did you see in the news the other day where some guy solved a Rubik's Cube in 10 seconds? Hah! Bet Superman coulda done it in 5! He certainly didn't have any problems with this early eighties Rubik's-like MAGIC SNAKE. I don't recognize the art style at all on this ad that ran in some 1983 DC comics. Hey, I started to mention the name of the store but I never realized how hard it is to talk about a certain toy store when they can't spell their own name properly and my PC won't allow me to spell it their way! I did, by the way, have one of these Snakes but I think I lost interest in it after about ten minutes when I couldn't do a darn thing with it!
Posted by Booksteve at 1:04 PM