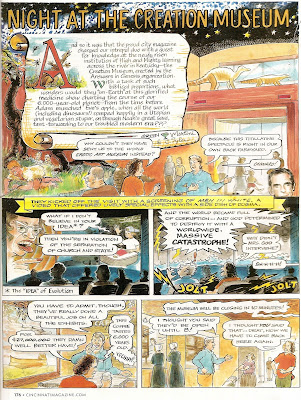 Here's a brand spanking new 4 page color comic strip, NIGHT AT THE CREATION MUSEUM, by legendary Underground cartoonist Justin Green (in collaboration with his award-winning wife Carol Tyler and Greg Martini). One of the seminal artists of the movement, Green is probably still best known for BINKY BROWN MEETS THE HOLY VIRGIN MARY. A few years back he settled in Cincinnati of all places and here at the Library we wrote previously of my encounter with him. 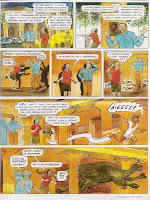 ccess to this regional publication. If you're in Southern Ohio or Northern Kentucky, I recommend you go buy this month's issue for much better reproduction.

For those unfamiliar with the Creation Museum, it's a recently opened, controversial religious enterprise that "teaches" a history that contradicts much of what you've been taught. In this version of the story, for example, the world is only a few thousand years old

and dinosaurs once lived with man. (In fact, one of the guys working on the museum told me a few years ago that God MAY have simply created dinosur BONES without dinosaurs themselves ever having existed at all! When asked what the logic of that would have been, I was greeted with the old "Ours is not to reason why...!") 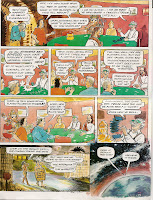 Posted by Booksteve at 6:51 AM