As a child in the early sixties, I enjoyed the dressing up and the anticipation more than the event of Halloween itself. In fact, I rarely even ate much of the candy! I recall my mother dragging me from door to door in bitter cold October winds with a coat over my costume. At each house, I'd doff the coat like a little flasher, whisper "trickertreat!" through chattering teeth and then after getting my swag scurry back to mom waiting at the gate as I struggled to get my coat back on.

Of course, this was the era where the old razor blades in the apples rumors (never substantiated as I understand it!) began and, at least around here, society's reaction was to move Halloween to the nearest bright, sunny Sunday afternoon. Thus for several years kids bizarrely canvassed their neighborhoods throughout midday for candy and treats!

I usually went for the Ben Cooper costumes, even then the brand name thing working on me. In 1965 I was an astronaut, in '66 I was Batman (and who wasn't?). Superman and the Incredible Hulk followed. Then Spider-Man and Archie Andrews! Then, for some reason I thought I'd outgrown the holiday so one year in the early seventies, I had no costume! What to do? What to do? Well, I simply combined my leftover Spider-Man costume with my leftover Superman cape and my leftover Archie mask! But of course! 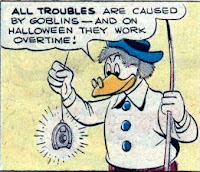 Outside of one Cub Scout event circa 1967, the only Halloween party I ever attended was in 1981 and I was dressed all in black as a masked burglar. The last photo my mother--who died of cancer a little over a month later-- ever took of me was wearing that costume. There were a couple of kids there but this was basically a grown-up party with alcohol and even a few suspicious herbs being shared around by the hostess (8 months pregnant and costumed as a virgin bride). It was really the last time I'd bother with Halloween.

Except, of course, at work. Every year someone suggested that we all dres

s up for Halloween and on those years where it was approved, I went along. One girl from England came wearing normal clothes but with her green card pinned to her shirt. "I'm an alien!" she announced proudly. My future wife also preferred the pun-like costumes, once wearing a gypsy outfit with a goblet on her head--"Peasant under glass." My own most memorable costume during that period was a hastily pulled together version of Grant Morrison's ZENITH!
Then along came my son, BookDave, a Halloween baby born as he was late this month in 1996. At a week old, we carried him around the neighborhood in a Mickey Mouse costume showing him off as our treat! He even got some Tootsie Rolls which...ahem...I ate.

Since then, he's embraced Halloween as his favorite 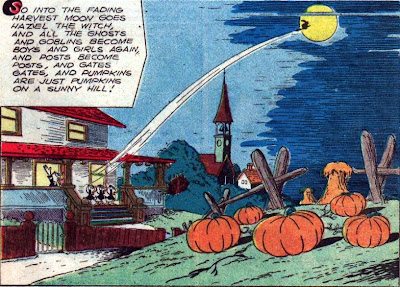 holiday and has dressed up as a Spider, Harry Potter, a Knight and a vampire. He's developed his own unusual style, though. We go down one or two blocks and he politely gathers candy. Then we rush back through the oncoming throngs (we're on the Halloween route!) of kids to our own front porch where he proceeds to give out all of his recently procured candy to other trick-or-treaters! From time to time (since he was three) he will pat the smaller kids on the head and say "Cute costume!" When he's given out his own loot he retires back into the living room to play video games leaving his mother and myself to hand out what's left of the ridiculously expensive and never quite enough candy we've purchased on sale earlier in the day!

Posted by Booksteve at 7:06 AM