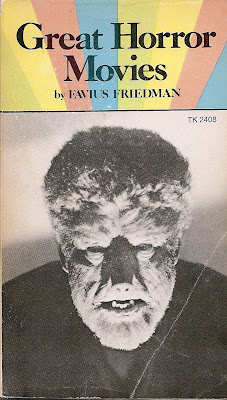 You know you’ve been blogging for awhile when you can’t recall whether or not you’ve already blogged about something and you’re too lazy to check. This book, GREAT HORROR MOVIES (1974) is another one of those Scholastic Book Club titles that were sold in schools. It’s author, Favius Friedman, was a bestselling writer of these, compiling volumes on mythology, history, music, movies and more. This particular one is actually quite a good overview of the horror genre to that point, just as it was about to change forever with films like THE EXORCIST, THE LAST HOUSE ON THE LEFT and THE TEXAS CHAINSAW MASSACRE. The new horror films from that point brought both a heightened sense of reality and a heightened level of violence—not always in the same picture. Old style horror films became more and more the objects of ridicule and parody. This book, however, celebrates them and rightly so. Not just the classics, either. From THE CABINET OF DR. CALIGARI through the Universal monster movies and the fifties sci-fi thrillers, Friedman looks almost dispassionately at his subject. His coverage of 1960’s THE LOST WORLD (unlikely to be "great" in most people’s books) mentions that real lizards were used as the dinosaurs because stop-motion animation would have made the film too expensive to shoot. Hmmm…okay, first of all everybody laughs at those ludicrous lizards rear-projected! We did as kids! They simply are NOT dinosaurs! Second of all, did anyone CALL Ray Harryhausen for gosh sakes? I mean, this was a remake of his mentor Willis O’Brien’s original silent version. You can’t tell me he wouldn’t have found some way to make it work, y’know?
Bottom line—if you see this or any other books by the author at a used bookstore or a garage sale, don’t expect much but get ‘em anyway. They’re just good, basic books to have in any library.
Posted by Booksteve at 11:32 AM