Movies That Fell Through the Cracks # 30 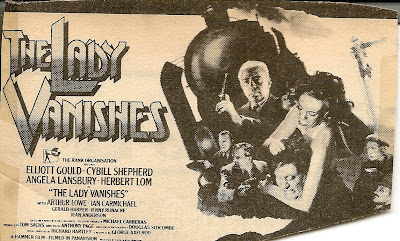 1938's THE LADY VANISHES has been one of my favorite Hitchcock films ever since I saw it at a big screen revival in the late seventies. Today's movie is not THAT movie. This 1979 THE LADY VANISHES remake never played around here so I never saw it. If it's available on DVD I've never seen that either. At best, it seems ill-advised as it always does when one remakes a classic for no apparent reason.

Credited on IMDB as being the LAST Hammer film of that company's long original existance, the picture's pedigree is good. The script is by George Axelrod who wrote, amongst other screenplays, THE MANCHURIAN CANDIDATE and BREAKFAST AT TIFFANYS as well as wrote and directed the darkly brilliant LORD LOVE A DUCK! Anthony Page, who helmed the great TV movie THE MISSLES OF OCTOBER, directed. Cinematography was from Douglas Slocombe whose career dated almost back to the original and who went on to do the Indiana Jones movies!

The cast is equally good if a bit eclectic. Elliott Gould had always been an unlikely leading man with his East Coast ethnic look and feel and yet he'd pulled it off thoughout the decade since 1970's M*A*S*H. Nearing the end of his glory days here for whatever reason, he was still putting out winners such as the same year's THE SILENT PARTNER with Christopher Plummer's truly evil Santa Claus! Still a few years away from coming into her comic own with MOONLIGHTING, beautiful Cybill Shepherd is the film's leading lady. Ian Carmichael and Arthur Lowe take on the comedy relief roles. These had been played so Britishly in the original by Basil Radford and Naunton Wayne that the beloved pair went on to appear as the same characters in other pictures! Herbert Lom (so funny in the PINK PANTHER films) also appears.

In the pivotal role of "Miss Froy," the title "lady who vanishes," is quintessential sweet little old lady Angela Lansbury (so unforgettably dark in Axelrod's MANCHURIAN CANDIDATE). From what I understand the film was shot on a real train on real locations and looks quite good. The IMDB reviews from those who've seen it are mixed at best. Still, it sounds promising...if in the end all rather pointless.
Posted by Booksteve at 11:08 AM