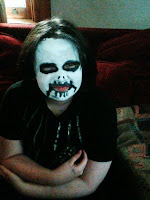 Here's a look at BookDave in all his face-painted glory as a relative of Jack Skellington. As expected, we did a few blocks up and a few blocks back, then he gave out his candy and went inside where we attempted with varying degrees of success to remove his makeup. Ahem. Anyway, he ended up playin video games whilst his mother and myself attended the little beggars that just...kept...COMING! Counted 12 Spider-Men (about half in the black costume), lots of little dragons, a number of dead cheerleaders and way too many overage princesses (that looked more like teenage "working girls"). Surprisingly, we only had two Harry Potters...and they were both together!

On another note, at some time in the next 24 hours this blog receive its 100,000th visit! Wow! Sure a lot of folks come here looking for Linda Blair au natural but from the looks of things lately, a lot of them like what they see! Thanks, everyone! Coming soon there's more Linda Blair, more weird comics, more badly costumed heroes and a major announcement concerning our project on the late Christa Helm!

Tips are never required but always appreciated!
Posted by Booksteve at 9:30 PM