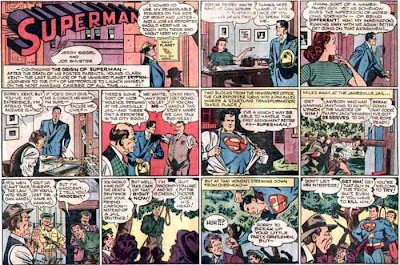 Looong day today but I came home to find a fun new site! Mail It To Team-Up had a link to a cool "work in progress" site called The Speeding Bullet which archives SUPERMAN newspaper strips! Much of what they have right now are samples with some years still all together empty but the layout is good and what IS present is a treasure trove of little-seen SUPERMAN artwork! Especially interesting, of course, are the ones that go beyond the Kitchen Sink reprints from a few years back! There's even a segment on the seventies WORLD'S GREATEST SUPER HEROES strip that I meticulously clipped out at the time (and which was covered earlier on this blog!). The only problem I have is the reproduction of the strips could use a little tweaking. Seen here is a segment from a newspaper origin story that I tweaked myself!
Although still credited to Siegel and Shuster, the art here is clearly by Wayne Boring who's actually credited on some of the daily strips. Writing MIGHT be Jerry.
Posted by Booksteve at 9:58 PM