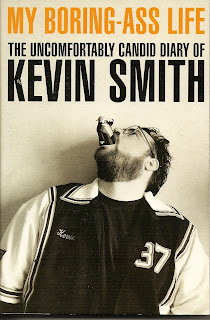 Behind what has to be the stupidest cover I have EVER seen, the always entertaining Kevin Smith shares a considerable number of his tmi diary entries (previously shared on the Net) and, in the process, gives a fascinatingly intimate portrait of a creative, successful man stuck in the same boat with the rest of us. I ignored Kevin Smith at first, initially finding his humor a tad too vulgar for my tastes. Then one day, simply because of the title (now, THAT’s a long story we aren’t getting into at the moment), I watched CHASING AMY and I loved it! I was particularly enamored of the Jay and Silent Bob characters. Apparently everyone else—including Smith—was enamored also as the duo went on to appear in nearly every one of the filmmaker’s projects, eventually dominating in their own JAY AND SILENT BOB STRIKE BACK. A few years back friend Kim kindly loaned me her stash of Smith DVDs and I became a true fan. DOGMA, in fact, became a favorite of both my wife and myself!
In this book, we see the everyday moments and behind the scenes issues that plagued Kevin’s success. Not the least of these was when his closer than a brother friend Jason Mewes became a seemingly hopeless addict. The chronicle of Smith’s endless attempts to literally save his friend and the learning process he himself goes through make for engaging, often heartrending reading in the middle of what otherwise is an open-faced id sandwich of hilariously vulgar humor. Throw in a number of rants on this and that and you have a fully satisfying read. With this book, Kevin Smith creates his most interesting, fully-rounded, warts and all character. It’s probably pure coincidence that it just happens to be himself.
You can get a signed copy of the book directly from the man himself here:The View Askewniverse - Main
Posted by Booksteve at 9:28 AM