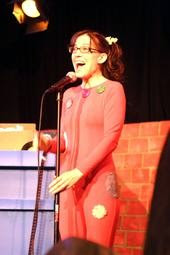 If you check out Erica at Erica Doering - Voiceovers for Sale you'll find samples of her impressive voiceover work as well as a link to her own blog and some stand-up bits. While I sadly must admit that her comedy bits themselves don't exactly leave me rofl, the glint in her eye, her big smile and her delivery won me over quickly. (Tmi,perhaps but I always love a girl with glasses, too!) Her slice-of-life blog, LIFE AS A HOLLYWOOD NOBODY, is most enjoyable and I wish she would update it more often.
Posted by Booksteve at 1:28 PM