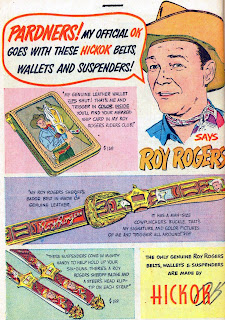 Here's a great ad from the Cowboy King! Roy Rogers was as big as they come from the late 1940's through the late 1950's. As a child in the early sixties, Roy's TV series was still in regular reruns so the former Leonard Slye (born in Cincinnati!) was an early hero of mine, also! As late as the mid-sixties, I remember that the only school tablets I wanted were the ones you could STILL find with Roy and Trigger on 'em!
Posted by Booksteve at 7:18 AM