Shazam!-Grim and Gritty by C.C. Beck 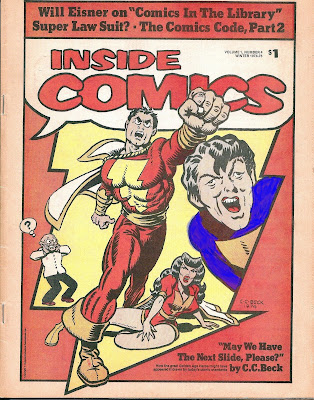 Yesterday, AOL ran a piece on the best airport restaurants in the US. As I work in an airport, I gave it a read and was surprised to find that it was written by Conde-Nast travel writer Joe Brancatelli who was --in an earlier incarnation--an editor for THE MONSTER TIMES and INSIDE COMICS! As I am still immersed in reading the 1940's adventures of Captain Marvel, this all reminded me of the cover of 1974's issue 4 of INSIDE COMICS which featured this "grim and gritty" interpretation by Cap's original artist (who had just left DC's revival in disgust at that point). Strangely, DC apparently took the idea to heart and before the end of the original SHAZAM run had poor Don Newton (himself a big Beck fan who would undoubtedly have preferred not to) doing a musclebound, oh-so-serious version of the Marvel Family. It didn't sell because, to a large extent, Beck's complaints were right. The original Captain Marvel run in the forties and fifties is an almost perfect series. Continuity is not always great but fans didn't really notice or care about that until the sixties. The stories are invariably light but well-told, fun but exciting, beautifully drawn and cleverly written (often by Sci-Fi legend Otto Binder). DC's SHAZAM wasn't bad but it never quite seemed to get it and later floundered around for a new direction that never really came. Subsequent revivals have gone from stillborn to entertaining but unoriginal homages to the current myth-destroying TRIALS OF SHAZAM. Sigh. Guess in the real world the magic lightning only strikes once.

Apparently the publishers of INSIDE COMICS would have had to have paid more for just a little blue and thus Junior's costume on the original was the same red as the others. I've taken the liberty of attempting a quick color correction on my scan.
Posted by Booksteve at 11:28 AM