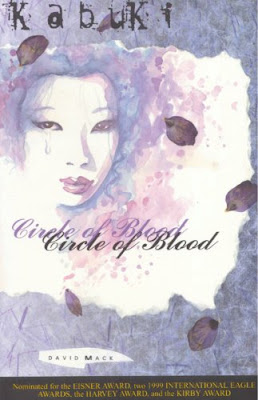 David Mack lives about twenty minutes away from me and I have it on good authority that we've met...before he was David Mack. Chosen by a local newspaper some years ago as one of several "most likely to succeed" students, he is clearly not wasting that faith. His paintings (seen at the Official David Mack Website) are exquisite. His DAREDEVIL run actually made fanboys kinda forget about Frank Miller...at least for a bit. Now I hear he's got a new children's book! And then there's KABUKI, his Magnum Opus. A couple of years back, he donated a run of his KABUKI graphic novels to the local public library and I'm sorry to say that I am only NOW getting around to reading them. Seen here, his very first is already a polished piece of work with solid storytelling and an embryonic version of his ever-growing, ever changing art style. The story has a vaguely BLADE RUNNER meets THE CROW as written by Neil Gaiman feel to it with its look at a unique female assassin in a near future Japan but if that makes it sound derivitive, it really isn't. No less an innovator than Jim Steranko provides a gushy introduction to this volume. Mack himself quickly begins to redefine comics storytelling and innovate in his own right throughout this and the subsequent volumes.

I might have met David Mack but I've never really met David Mack. I MAY finally get to meet him next month as he's scheduled to appear at Mid-Ohio-Con - Serving Comic Book & Pop Culture FUN Since 1980! .

The jury's still out, however, on whether I'LL finally be able to attend after all these years. If you haven't dropped a tip in the ol' PAYPAL tip box lately whilst visiting my Library, this would be a good time to do so if you like what you see! If I go, I promise a full report!
Posted by Booksteve at 1:46 PM