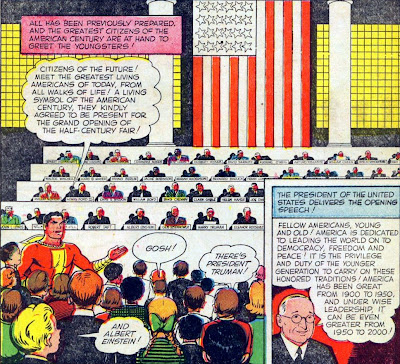 Here’s an atypical scene from a most unusual 1950 CAPTAIN MARVEL adventure. Seems Cap convinces station WHIZ to co-sponser a Mid-Century Fair but that evil ol’ Dr. Thaddeus Bodog Sivana makes a supreme effort to stop the massive event. He, of course, fails and in the end we see this unusual gathering of "the greatest living Americans of today from all walks of life." And what a bunch they are, too!
Harry S Truman-then President of the US (even on Earth-Fawcett)
Ernest Hemingway-overrated author
Grandma Moses-primitive artist
Joe Louis-legendary African-American prize fighter (a long way from Billy’s valet "Steamboat!")
Herbert Hoover-former US President
David Sarnoff-founder of NBC
Eugene O’Neill-playwright
Arturo Toscaninni- conductor
William Green-labor leader who led the AFL
Arthur ???-Anybody?
Walter Winchell-gossip columnist (Hmm. Famous but what’s so great about him?)
Irving Berlin-one of the great songwriters of the century
William Boyd-Hoppy!!! Gives you an idea just exactly how big Hopalong Cassidy was at that time!
Bing Crosby-notoriously bad race horse trainer
Louis B Mayer-With what we know now about how he ran MGM he might have been arrested!
Jackie Robinson-the baseball player who symbolically eliminated the color line.
Clark Gable-on the downside of his career by this point but at one time the "King" of Hollywood
Chas E Wilson-businessman and soon to be Secretary of Defense
Marian Anderson-legendary opera singer
Henry Ford II-son of Henry Ford I, his legacy eventually led to the piece of junk I call a car.
Bernard Baruch-financier and advisor to Presidents
Frank Lloyd Wright-Architect made famous in a song by Paul Simon (amongst other things)
Albert Einstein-Famous physicist and reputed idol of Marilyn Monroe
Gen Eisenhower-the future president who won the war and doesn’t even merit his first name?
Eleanor Roosevelt-beloved former First Lady and unofficial (?) world ambassador
John L Lewis-labor leader who co-founded the CIO (Note he was NOT seated near AFL’s Green)
Robert Taft- US Senator from Ohio and multiple year loser for the Republican Presidential nomination
Oh, and with no reason whatsoever to believe so, I think the shadow guy over the letters n-i-t in the word "united" in the second panel is comedian/humanitarian Eddie Cantor and the two gentlemen together to his right are Stan and Ollie!
Great Americans all! Hope the next half century went well on Earth-Fawcett. Hmmm…wonder if they got the flying cars and jetpacks we were expecting.
Posted by Booksteve at 8:41 PM