Movies That Fell Through the Cracks # 29 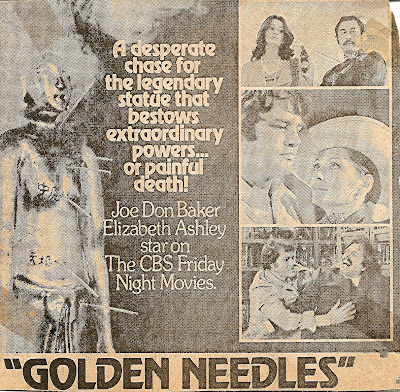 Not long after Bruce Lee’s death, ENTER THE DRAGON’S Producer Fred Weintraub reunited with director Robert Clouse and composer Lalo Schifrin (as well as co-star Jim Kelly) to bring the world 1974's GOLDEN NEEDLES starring…wait for it…Joe Don Baker?! When I say "bring the world" let me add that MY little part of the world never got it at all until it finally turned up on television a few years later which is when this ad appeared.
While everything coalesced so perfectly in their previous effort, here it all seems rushed and uninteresting. The outlandish plot deals with a missing statue acupunctured by long needles in such a way that, if done to a male, acts as a kind of Super Viagra (or as the ad says, "bestows extraordinary powers."). If done the least bit wrong however, it acts more like fast-acting cyanide. Joe Don as a big, stumbling American in Hong Kong, is hired to find the statue and an uneasy mix of martial arts, THE MALTESE FALCON and John Wayne-style heroics ensues.
The bizarre cast included one of my least favorite actresses, Elizabeth Ashley, along with old veterans Burgess Meredith (just pre-ROCKY) and Ann Sothern (still a few years away from THE WHALES OF AUGUST).
Not only haven’t I seen this flick since, I’m not even certain that I remained awake through it all on television that night!
Posted by Booksteve at 12:04 PM