Tom Chapin and Make a Wish

MAKE A WISH was an early 1970's childrens series that ran on Sunday mornings and can only be described as trippy. Host Tom Chapin looked like James Taylor and sang the show's memorable opening theme in a smooth as silk voice completely unlike that of his perhaps more famous brother, the late 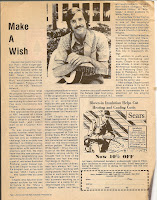 Harry Chapin. Here's a mid-series article on Tom from the Cincinnati Post along with my first ever attempt at adding a YouTube video--this one of the aforementioned series opening (and the closing, too!).