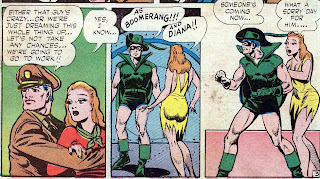 Hmmm...Maybe I should start a new series called "Badly Costumed Heroes" because here's yet another one. This one's called BOOMERANG and comes from TERRIFIC COMICS (which was a bit of a misnomer). While admiring his sartorial splendor, note also his sidekick, the fearsomely named...DIANA! Why do I suspect that ol' Mister Boomerang designed her costume for her? "Come on, honey. It's hep! It's stylish! Having so little of your flesh covered will HELP us in our crimefighting by distracting the enemy and so what if it's a little tight in the rear? It looks good on you! Heh, heh, heh!" Of course, one look at him should have told her that this guy's no Mister Blackwell either!
Posted by Booksteve at 4:45 PM