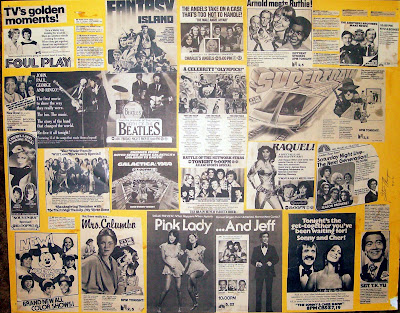 This collage from the early 1990’s is, of course, more than a bit facetious in its title, TV’S GOLDEN MOMENTS. In fact, celebrated here are more wacky WTF ideas from 1970’s and early ‘80’s television than you can shake Garry Marshall at! In those pre-cable days, however, these were sometimes all we had, folks. So we watched…and watched…and kvetched about the crap on TV! Now we have 300 or so channels and I STILL can’t find anything worth watching. Ironically, if I came across some of these unlikely to be collected on DVD gems anytime soon on my cable today, I’d probably watch!
An incomplete listing of what you see includes:
SUPERTRAIN-NBC’s highly touted "LOVE BOAT on a train only with mystery instead of romance" concept was notable only for the participation of Vincent Price and wife Coral Browne (as Capt. Stubing and Gopher, respectively.)
THANKSGIVING REUNION WITH THE PARTRIDGE FAMILY AND MY THREE SONS-Now this had potential! If the Partridge’s bus broke down in front of the Douglas home and the two mega-families were forced to spend the holidays together, this COULD have worked! Unfortunately, it was a clipfest with Fred MacMurray and Shirley Jones sitting around introducing other cast members. The reason for combining these two shows that had less than nothing to do with each other is totally lost on me.
MRS. COLUMBO-Okay, you see, Peter Falk was always threatening to walk out on COLUMBO if he wasn’t paid a gazillion bucks a season AND get shorter seasons. NBC got tired of caving in and so hired Kate Mulgrew to be the oft-mentioned but never seen wife of the rumpled detective and have HER solve mysteries. Who needed Falk anyway? Hah! Well, this series just confused the hell out of everybody and Falk was soon back. NBC tried to keep it going anyhow by retitling it KATE COLUMBO and later KATE LOVES A MYSTERY. I think they even eventually changed the character’s last name. Didn’t help. I don’t think the Lieutenant ever mentioned his Missus again.
THE SONNY AND CHER SHOW-Sonny’s solo series flopped and Cher’s fell quickly out of early favor. Thus the network reunited the now very publically divorced couple for the cameras. The jibes just weren’t funny anymore, though, because we all knew what had gone between them. Instead of looking forward to mom and dad with Chastity at the end of every episode, now we just felt sorry for Chas. Sigh.
FITZ AND BONES- Concept: The Brothers Smothers are back only this time they’re non-controversial detectives instead of comedic social commentators. Yeah, right.
DIFF’RENT STROKES-"Arnold Meets Ruthie," it proclaims! Okay, let’s take a cute kid who was already full of himself by that time and have his horribly preachy "sitcom" cross over with HELLO, LARRY, one of McLean Stevenson’s legendary post-M.A.S.H. flops so he can meet cutie Kim Richards (formerly of NANNY AND THE PROFESSOR and later shockingly blown away in John Carpenter’s original, classic ASSAULT ON PRECINCT 13). If either show had been funny and had this crossover been made when both kids were at a cuter stage, this might have seemed like a good idea.
SATURDAY NIGHT LIVE-THE NEXT GENERATION-To be fair, there was some good stuff here during this ill-fated "new cast" season. I liked Denny Dillon, Gail Mathius, Joe Piscopo and even Charlie Rocket (whose dropping of the "F Bomb" on live TV got most of the cast canned) later redeemed himself as a good character actor. Who would have believed that Gilbert Gottfried would have gone on to be the most successful out of this bunch, though?
CHARLIE’S ANGELS-" The Male Angel Affair" was the perhaps inevitable attempt at doing a male variation on the theme, notable only for the presence of Miss Barbara Stanwyck as the female "Charlie." Unlike the faceless leader of the girls, she was very much seen on camera. I guess if you pay for Barbara Stanwyck, you expect to SEE Barbara Stanwyck!
PINK LADY AND JEFF-Hmm… I think this IS out on DVD, isn’t it? What can I say that hasn’t already been said? Hi, Mark!
THE BRADY BUNCH VARIETY HOUR, BATTLE OF THE NETWORK STARS, a Johnny Yune sitcom, Cheryl Ladd and Raquel Welch specials, Beatles TV bios. Sigh. It really was the Golden Age of Bad TV!
Posted by Booksteve at 8:14 PM