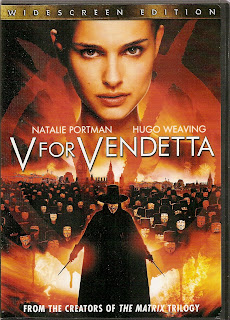 Finally got around to seeing V FOR VENDETTA yesterday and I was quite impressed. I followed the original Alan Moore/David Lloyd comic series in the late, lamented UK magazine WARRIOR as it originally came out in the eighties and for the most part enjoyed it. I must admit that I felt it bogged down quite a bit in the middle and the later DC ending was a bit of a disappointment. One little-remembered aspect of the original was the rampant fan speculation that V would be revealed to be MARVELMAN! Since Alan Moore was busy rewriting comics history elsewhere in WARRIOR with that now-controversial series it almost made sense! Surely he would eventually tie the two series together! While that was probably, in retrospect, never to be his intent, the very possibility was derailed when Marvel comics began complaints about MARVELMAN just because of the title. The immensely popular strip was eventually dropped from the lineup and left to be continued later in the US as MIRACLEMAN. Meanwhile V FOR VENDETTA continued. I began to think of it as similar to Moore's take on Marvel's NIGHT RAVEN (also drawn by David Lloyd) via THE COUNT OF MONTE CRISTO and THE SHADOW.

When it comes to the film, I thought they did an excellent job of translating the strip, streamlining some of the slower moments and emphasizing that Evie is the hero--not V, a fact that was often obscured in the originals. Alan Moore, as is his nature, refused to allow his name on the film. More incredulously, no one in the Making Of documentary seems able to mention Moore's contribution, either. IT's as if Lloyd, who DOES appear, just spontaneously illustrated the story with no writer involved at all. Alan (May I call you Alan?), as a creative artist, I very much understand your desire to distance yourself from other media interpretations of your work but to leave your name completely out when discussing the genesis of the project seems akin to rewriting history...much like they attempt to do in the story itself.
Posted by Booksteve at 10:40 AM