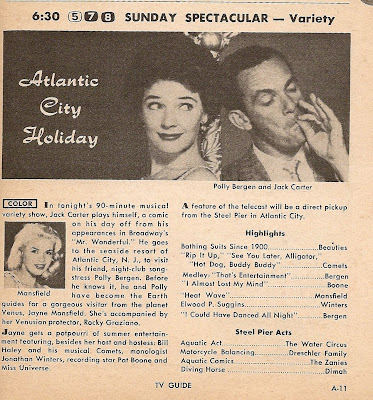 Found this one while digging through old TV GUIDES. Listed on IMDB as if it were a simple variety special with all of the stars playing themselves, this "Spectacular" ( as they called them waaaay back in the day) sounds much more interesting in this ad. Sex Symbol Jayne Mansfield had just done her breakthrough role in THE GIRL CAN’T HELP IT and apparently appeared here as an alien from Venus protected by boxer Rocky Graziano as a fellow Venusian! Comic Jack Carter and singer Polly Bergen guide the pair through 90 minutes of full color (and that was a big selling point to those who could afford color sets!) acts from Atlantic City including Bill Haley and the Comets! I’m betting this show has never been seen again unless one of the Museums of Television and Radio has a copy. Carter was never a favorite of mine as a stand-up but always enjoyable as a character actor—often a villain—in sixties and seventies TV. He was a pretty good panel game show member also and is still around today. Polly Bergen is also still around having recently turned up on DESPERATE HOUSEWIVES after a long and successful sideline career in cosmetics. Did anyone reading this ever actually SEE this intriguing show? Something tells me it was more about the Zanies and the diving horse than any of the potentially really cool stuff.
Posted by Booksteve at 8:54 PM