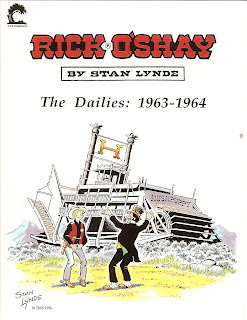 I believe I've written about RICK O'SHAY before but the 1996 book seen here is new to the Library this week. Stan Lynde did this comic strip for several decades before switching to the more serious LATIGO and writing a couple western novels. Beginning in 1958, Rick O'Shay stumbled on a stranded gambler named "Deuces" Wilde and then the pair stumbled on a ghost town where they decided to settle. As the town grew up again, the readers learned that this was not, in fact, the old west but a sort of left behind corner of the modern world. Soon enough, "Hipshot" Percussion, the oh-s0-cool gunfighter with the heart of gold (picture Fonzie as a cowboy with a string mustache) joins the cast and almost steals the show. Early stories went back and forth between semi-realistic western melodrama and pop culture parodies such as the one in this volume featuring Dr. Franklinstine's robot. Made up of leftover television parts, the robot spoke in then-topical (and now horribly dated) TV commercial catch phrases. Over the years, Stan added assistants and the art style became much more realistic. The modern elements mostly faded and RICK O' SHAY became one of the last of the great cowboy strips, continuing long past the heyday of the TV westerns that spawned it.

In the 1990's Lynde began reprinting the series. I'm not certain how many volumes eventually came out but they're all choice examples of a comic strip done right. I got this one at a Borders yesterday. You probably won't find these on a shelf in your neck of the woods but obviously your local bookstore can get this and other volumes for you. I'd have them do it right away if you're a western fan or just a fan of classic sixties comic strips!
Posted by Booksteve at 11:59 AM