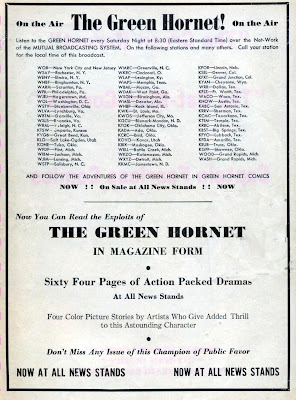 Here from the early 1940's is a back cover ad for THE GREEN HORNET listing radio stations throughout the country where the popular adventure/mystery show could be found. Locally, I would have listened (had I been alive) on WKRC which is still in business today albeit as an arch-conservative all-talk station!

Most of you probably know that the Hornet--who also inspired THE BLUE BEETLE--was himself inspired by THE LONE RANGER with Britt Reid being the son (or was it grandson?) of the Ranger's nephew Dan who appeared as a regular in many LR episodes. The pulp-inspired character was successful enough to earn several versions of a comic book and a classic movie serial before being revived in a less successful TV series in the mid-sixties. That series has, over time, become a cult favorite (and not JUST because of Bruce Lee!). I myself once appeared as a wise-cracking newspaper photographer in a re-creation of a GREEN HORNET episode at the Cincinnati Old-Time Radio and Nostalgia Convention. We have here at the Library a giant floor model radio from the 1930's and I've said for years that the problem with it is that even if you warm up the tubes it still gets talk-radio and hip-hop and not classic radio series! Sometimes I just turn it on and watch it light up, then turn the sound down and turn on the tape player behind it and listen to the Flight of the Bumblebee. THE GREEN HORNET stings again!
Posted by Booksteve at 11:03 PM