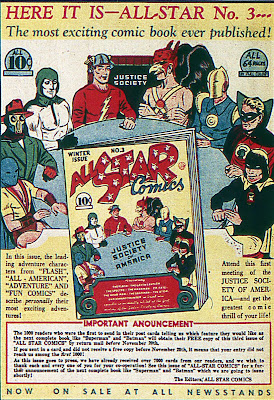 DC may not have known what they had when they first published SUPERMAN as it was months before he appeared again on an ACTION COMICS cover. By the time of ALL STAR COMICS # 3, however, they seemed to be a little more precognitive. In this contemporary ad, the issue is referred to as "the most exciting comic book ever published" and it certainly may have been just that! This legendary issue with its much copied and parodied JUSTICE SOCIETY OF AMERICA cover presented the very first team-up of super heroes and led to Timely's ALL-STAR SQUADRON and eventually to the JUSTICE LEAGUE and THE AVENGERS. This one book profoundly influenced young Roy Thomas and young Jerry Bails and later they profoundly influenced not only fandom but the Silver Age! "Attend this first meeting of the JUSTICE SOCIETY OF AMERICA and get the biggest comic thrill of your life!," it says. The stories themselves weren't much being solo stories told by each memeber of the "club." The point was the potential! Who knew that it would someday lead to a several hundred member LEGION OF SUPER-HEROES?
Posted by Booksteve at 10:55 AM