Ditko and the Doc 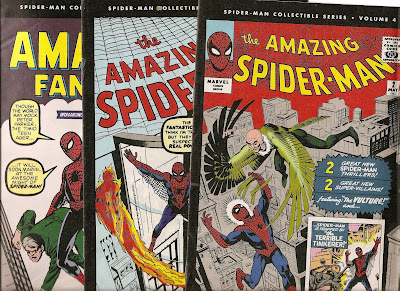 Finally got to see Jonathan Ross's IN SEARCH OF STEVE DITKO documentary that aired in the UK last weekend and it was great fun as well as being quite informative. It's now on Youtube and at a link from Mark Evanier's site so you can see for yourselves respected comics creators such as "magician" Alan Moore, Neil Gaiman, Mark Millar and Stan the Man himself (along with many others!) fawning over the work that defined a large portion of pop culture as we know it today. Good also to see Cat Yronwode and former Marvel letterhack Paul Gambaccini who moved to England and found fame as a broadcaster and author. Stan's interview is the most telling as the cordial Ross somehow gets him into inadvertantly giving the very definition of the creator issue Ditko has had with him all these years. Still, the best part is undeniably the ending in which Ross--with Gaiman in tow--actually call and then drop in on the reclusive Mister Ditko. What could have been a nightmare of privacy invasion in someone else's hands becomes a respectful, upbeat ending...marred only by the fact that Ditko's probably having to move to a new office now as, while he himself refuses to be photographed or filmed, his address is clearly visible in several shots and it's pointed out that his name is on the door. Hope that didn't shift Ross from the white side to the black side.

Seen here are a few of Steve Ditko's seminal SPIDER-MAN issues in their recent Sunday supplement editions as collected for the Library here by ace researcher DEREK Tague. Newspaper readership may be down but I wouldn't be surprised if they're still bigger than comics readership ever was. It's entirely possible that Ditko's work in these reprints was seen by more people than those who saw it in the originals!
Posted by Booksteve at 1:05 PM