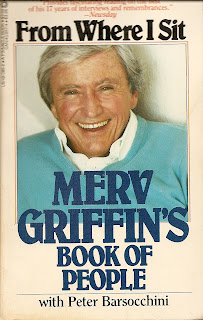 A bit late but I wanted to note the recent passing of Merv Griffin. Because of his later success in game show creation, Merv’s long stint as a talk show host seems almost forgotten but he was one of the best. Originally with haughty actor Arthur Treacher (later of fish and chips fame) as his Ed McMahon-style sidekick, Griffin pioneered a lighter style than Johnny Carson that would eventually lead to a feeling that one was just sitting in on some folks talking. His comfortable style even got favorite guest Orson Welles to make up on TV with his long estranged partner John Houseman in one memorable episode! The book seen here, FROM WHERE I SIT, is one of several books by Merv Griffin but this one is made up of reminiscences of some of those pleasant interviews. Orson is here but you’ll also find Jack Benny, Alfred Hitchcock, Jack Warner, Henry, Peter and Jane Fonda, Henry Kissinger, Burt Reynolds and Richard Burton. If you only know Merv Griffin from the fact that he brought the world JEAPORDY and WHEEL OF FORTUNE, go to a used bookstore and look for FROM WHERE I SIT-MERV GRIFFIN’S BOOK OF PEOPLE and settle in for a treat.
Posted by Booksteve at 8:16 AM