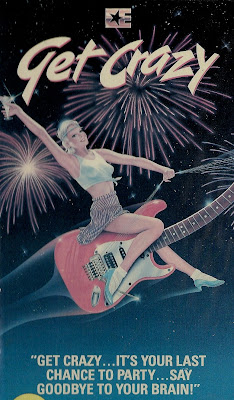 1983’s GET CRAZY was, in a very real sense, the follow-up to the great ROCK ‘N’ ROLL HIGH SCHOOL (as opposed to that too little, too late ROCK "N’ ROLL HIGH SCHOOL FOREVER with Corey Feldman). It may look like a Roger Corman film but actually the Executive Producer was Herbert F. Solow, one of the men who brought us the original STAR TREK! ROCK ‘N’ ROLL HIGH SCHOOL’s director, however, carries over and brings his unique style of hip, in-joke comedy to the fore. Now the darling of NBC’s HEROES, director Allan Arkush does a great job here on an obviously low budget, most of which probably went to pay for top-billed Malcolm McDowell. The ensemble cast is led by Daniel (HOME ALONE) Stern as the everyman hero and Gail (IT’S A LIVING) Edwards as his female counterpart. The great character actor Alan Garfield (here in his Goorwitz phase) appears as a Bill Graham type. Ed Begley (when is he old enough to drop the "junior?") is surprisingly slimy as the villain with former pop idols Bobby Sherman and Fabian hilariously cast as his fawning assistants! Throw in the Turtles’ Howard Kaylan looking like Mike Love in his guru period, the Doors’ John Densmore, Lou Reed amazingly fun as a Dylanesque folkie, the wonderful Bill Henderson (my favorite performance here!) and Malcolm McDowell’s

conversation with his own penis and you have a winner! I was going to write a basic plot synopsis but in looking up production details, I note that someone named "Dudeness" has a lengthy and detailed one on IMDB so I refer you to his Get Crazy (1983) - Synopsis for more on this wacky picture.
Not a forgotten film but it wasn’t a hit and is not always the easiest to find. I actually had never heard of it at all until a former employee of mine told me about it and then later gifted me with her own pre-viewed VHS copy circa 1989. There’s some pro-drug humor in the FREAK BROTHERS style and anarchistic views but at it’s heart it’s an old-fashioned "Hey, let’s put on a show and save the old theater!" plot! Find it, watch it, laugh at it!
Posted by Booksteve at 11:23 AM