Snoopy and the Red Baron 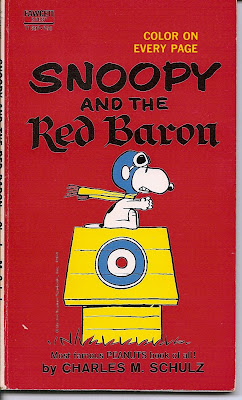 In the early 1960's, Charles Schulz gave up all pretense that Charlie Brown's dog Snoopy was in any sense similar to a real canine. One of the ways he did this was to have the beagle develop an overt imagination which led him to be a writer, an explorer and, on ocassion, a World War I flying ace. In the latter guise, our fuzzy hero would sit on the roof of his doghouse wearing a pilot's helmet, goggles and scarf envisioning himself in airborne combat with that greatest of all German flying aces, the Red Baron.

In 1966, a hardcover book was published entitled SNOOPY AND THE RED BARON. Seen here is the mass market paperback of that book from a few years later. The "color on every page" line refers to the fact that every single page is printed on a different day-glo color of thick paper--red,orange, blue, green, etc. Flip through it and it may cause siezures! The book simply reprints highlights--one panel per page--of some of the earliest Red Baron strips and yet is justly touted on the cover as being "the most famous PEANUTS book of all!"

Around the same time the book came out originally, a pop-rock group calling the 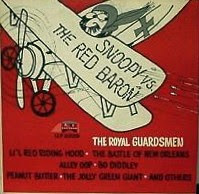 mselves the Royal Guardsmen somehow got permission to do a tie-in song. This, of course, was the catchy SNOOPY VS THE RED BARON, still heard on oldies stations to this day (I heard it last week!). Although a talented bunch, the group's only other successes came with a series of follow-up songs including the perennial holiday classic, SNOOPY'S CHRISTMAS. Their work has been reissued endlessly over the decades, often with Schulz artwork replacing this original cover. Seems like I read somewhere that they're still (or back) together and still singing Snoopy songs!

All of this probably did more for the modern reputation of the real Red Baron (aka "The Red Knight"), Manfred Von Richtofen, than any history of the "war to end all wars" ever did. A fascinating man--and the obvious inspiration for DC's ENEMY ACE series that came out around the same time of the original Snoopy flying ace strips--, here's a link to Manfred von Richthofen - Wikipedia, the free encyclopedia which gives a detailed history and biography...but doesn't even mention a beagle.
Posted by Booksteve at 9:31 PM