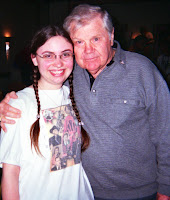 Everyone’s still talking about Jonathan Ross’s entertaining BBC documentary IN SEARCH OF STEVE DITKO. Something I personally found to be a nice touch in it was the scene where they were showing clips from various SPIDER-MAN projects. In the bit from the seventies American version, Ross makes reference to "overacting extras" whilst we see on-screen a near-hysterical guy saying he’d just seen Spidey. Well, that guy, the anonymous overacting extra in question, happens to be none other than my long-time friend from the Cincinnati Old-Time Radio Convention, Bob Hastings!
Here’s a photo I took of Bob at the 2006 OTR Con (with everyone’s favorite award-winning re-creation actress, Karen Hughes). Having grown up enjoying MCHALE’S NAVY on television, It was a bit of a shock to me a few years ago when I realized that this man that I watched on TV as a small child now knew my name! Bob first came as a guest at the Con twenty years ago now! In his initial year, he shared the spotlight with the great Parley Baer and told great stories of Joe Flynn and Walt Disney movies. He also directed one of the re-creations of OTR scripts that year and proved himself a frenetic taskmaster as a director.
Almost every year since then , I have been lucky enough to perform onstage with Bob including twice as Jughead to his Archie. Bob has told me several times that he enjoys working with me because unlike some amateur performers, I don’t just stand at the mike and read the lines. I look at the other actors and play off of them. I learned this from watching Bob with actor/director Ezra Stone. Sitting next to him onstage, he taught me how to mark a script and how to silently turn the pages so the sound isn’t "broadcast."
Bob began as a singer on radio way back in the 1930’s! He became the definitive radio ARCHIE ANDREWS right at the initial height of the comic’s popularity. In the fifties, his familiar voice was heard in several memorable episodes of X-MINUS ONE. In the sixties he occasionally spelled Mel Blanc as the voice of the raven in the cuckoo clock on THE MUNSTERS (and in the later TV reunion film played the clan’s cousin, the Phantom). Besides MCHALE’S NAVY, Hastings also appeared in soap operas, Disney comedies and guest roles on everything from WONDER WOMAN and THE ROCKFORD FILES to THE NIGHT STALKER. Bob was "Kelsey" who ran Kelsey’s Bar on ALL IN THE FAMILY for several seasons (the "token conservative" on the show as he says). In recent years, he was the voice of Commisioner Gordon on the already classic Paul Dini BATMAN cartoons and spinoff features as well as doing video game voiceovers in games such as JAKK AND DAXTER. Earlier this year, he appeared on the cast reunion film shot for the MCHALE’S NAVY season one box set and, now age 81, gave a memorable performance as THE CANTERVILLE GHOST onstage at Cincinnati.
Okay, Bob may have been an overacting extra in that SPIDER-MAN clip but he’s a solid, professional performer and I’m proud to have been able to work with him over the years. Thanks, Bob!
Posted by Booksteve at 7:25 AM