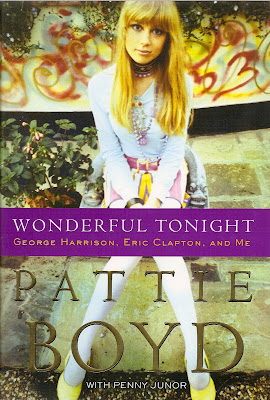 For those coming in late, we here at the Library have an entire bookcase of books on the Beatles. In the last few years I’ve quit buying them due to our financial issues (don’t forget that tipbox!) but I made an exception for WONDERFUL TONIGHT.
Actually I’ve said for years that I wished Pattie Boyd would write a book. I just wish it hadn’t been this one. Who is Pattie Boyd, some of you may ask? Like the fabled Helen of Troy, Pattie inspired several of the most beautiful love songs of the rock era including George Harrison’s SOMETHING (a favorite of Frank Sinatra although he often credited it to Lennon and McCartney) and Eric Clapton’s WONDERFUL TONIGHT, from which this book takes its title. In between, Ms Boyd also inspired what is inarguably one of the most soul-wrenching anthems of unrequited love, Clapton’s original LAYLA.
You see, Pattie Boyd met and became infatuated with the Quiet Beatle when she appeared as a teenage extra in A HARD DAY’S NIGHT. They were married, famously arrested for drugs and then George drifted into Eastern religions and didn’t pay enough attention to her. In comes his buddy, Eric "God" Clapton who falls for her like a ton of bricks but can’t do anything since she’s married to his best friend. So instead he becomes a hopeless junkie. The story has what SHOULD have been a happy ending when George (himself already sleeping with others including Ringo’s then-wife, Maureen!) tells the two of them they can be together with his blessing. Clapton cleans up his act…mostly. The three surviving Beatles even appear together at the wedding! So Clapton gets his girl—his great unrequited love—and then proceeds to cheat on her endlessly! WTF!!?? Eric, you shcmuck! You won! Don’t you get that? You not only survived but you won!!
Sigh. Clapton, to me, comes across quite poorly in this book. He’s revealed to be extremely neurotic to the point where he paid people to take his driving test and even his pre-wedding blood test! He makes poor choices and bad decisions over and over and in spite of his tremendous musical talent (he’s a favorite of my cat’s!) he never seems happy with his success.
Not that George comes across much better. Even though his ex eschews some of the seamier aspects of their lives at Friar Park that can be found in other Harrison bios, he still comes across as a self-absorbed jerk much of the time.
For her own part, the best parts of the story actually deal with Pattie’s growing up in Africa and the culture shock when her splintered, dysfunctional family ended up not only in the more urbanized worlds of England but right in the middle of the sixties revolutions! Even then, though, I don’t ever really get to LIKE Pattie. By the end of the book, she seems almost as innocent and naïve as she was in the beginning as if she’d learned very little at all from the journey and all the pain. Although she achieved her own success over the years, she, too, comes across as terminally unhappy.
As a Beatles fan, I suppose it’s a must have item but overall it deflates the era a bit too much to actually enjoy and you STILL get the impression she was trying to sugarcoat parts of the story.
Posted by Booksteve at 10:55 AM