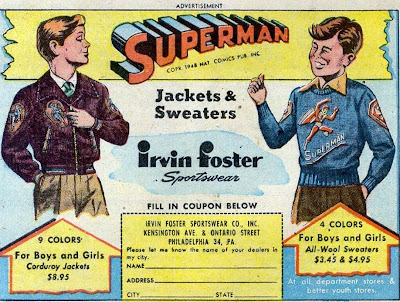 By the late 1940's, DC was making a ton of money from SUPERMAN out of merchandising alone (much to the displeasure of Siegel and Shuster!). Recently we ran an ad for a Superman belt and buckle. Now here's a couple of nifty jackets and sweaters. Actually, it looks as though the young man at left in the ad is proudly pointing out that his corduroy jacket has the authentic Man of Steel while the other poor, unfortunate lad seems to have a sweater depicting an off-model, mis-colored Kryptonian with some kind of red helmet. (Of course, that could just be the ad coloring 'cuz the kid don't seem to mind in the slightest.) By the way, it should go without saying that this ad is no longer valid!
Posted by Booksteve at 9:03 AM