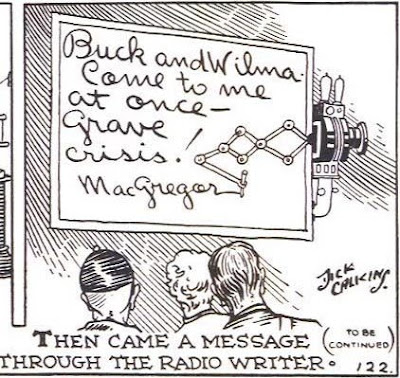 Here we have a Dick Calkins BUCK ROGERS daily from 1929 which actually predicts the advent of an e-mail system some 60 years or so before it become commonplace. In this case, the "radio writer" (who knew from computers in '29?) would seem to duplicate a message as written by one person and broadcast it to another location via a private closed circuit. The recipient's machine then has a device attached which literally writes out the message. Ol' Buck would undoubtedly feel very at home in our real life 21st century (but he'd wonder where the flying packs were!)
Posted by Booksteve at 9:46 AM