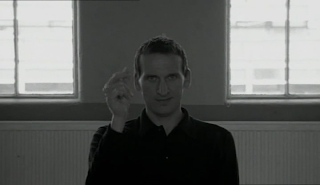 not news to anyone in the UK but to me it was a revelation...pardon the pun. THE SECOND COMING was a 2003 ITV two part TV movie from Russell T. Davies who would go on to become the man who resurrected the venerable DOCTOR WHO. It's filled with the same sense of style he would bring to that Time-Lord's adventures and, in fact, is filled with that Time Lord! Christopher Eccleston, Doctor # 9, plays Stephen Baxter, an ordinary Manchester bloke who disappears for 40 days and turns up claiming to be the Son of God. With the short haircut, toothy grin and natural charisma that would make him so popular in his sole season as the Doctor in 2005, Eccleston is a jo

y to watch. He finds a unique way--a miraculous way--to get his message to the masses and that message is that mankind has 5 days to present to him a third testament...or face judgement day. He gathers friends--disciples--about him including the aptly named "Judith" (Lesley Sharp who would also appear on a Davies DOCTOR WHO episode in 2008) even as the forces of evil rally not to stop him but to corrupt him and have him rule them! The world that initially embraces him comes to fear him as the whole show builds to what was undoubtedly a very controversial but ultimately logical conclusion! Just as Davies, upon Eccleston's departure from DOCTOR WHO, turned to David Tennant with whom he had recently worked on CASANOVA, one must presume that Eccleston was chosen as Davies' first Doctor because of his riveting performance in THE SECOND COMING!
Posted by Booksteve at 12:02 AM