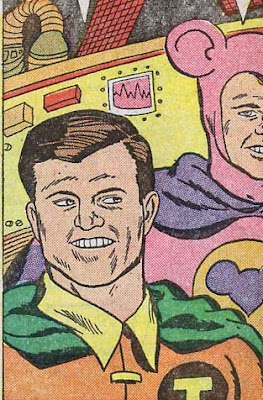 Up late again and I see that the news is just hitting the wires on Ted Kennedy's passing. He was a controversial man (to put it mildly) and heavily burdened forever by his brothers' large political, social and historic boots as well as by their assassinations. Add to that his own well-documented poor (again, to put it mildly) choices and you would expect that the man would have ended up a basket case. Instead he became and remained a respected legislator, statesman and a tireless fighter for truth, justice and the American way...literally right to the end. Guess that was to be expected of a guy who appeared as a comic book hero himself way back when in THE GREAT SOCIETY and its spin-off, BOBMAN AND TEDDY.
Posted by Booksteve at 1:37 AM