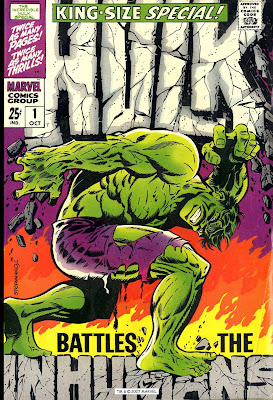 Longtime comics fans know the story of how Jim Steranko's sweaty head for the Green Goliath on the cover of the first HULK annual in 1968 was apparently deemed "too much" for the fans and was replaced at the last minute with a "clean" paste-over head by Marie Severin. No offense, Jim. That was 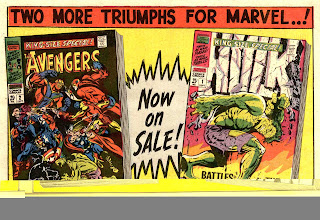 just how the business worked. Remember, this wasn't art, it was commerce. Something not quite right with Kirby's Captain America, have Johnny Romita paste over parts as needed. A seasoned eye can find quite a few touch-ups by both Romita AND Severin from those days and beyond. They undoubtedly were not the only ones either. Anyway, here's the HULK cover as it made it out. I actually DO think it's a tad better. What I never realized, however, is that Steranko's original version had, in fact, been published at the time, too...in this classic house ad! Compare. Which do YOU like better?
Posted by Booksteve at 11:02 AM