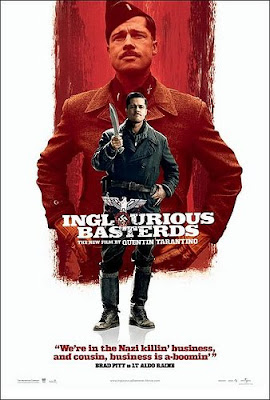 I'm on record as having become a fast fan of the movie INGLORIOUS BASTARDS when I first discovered it earlier this year. I was trepidatious at best when news began leaking out about Quentin Tarentino's remake. Well, now we know. Quentin Tarentino didn't even do a remake. To say the new movie, INGLOURIOUS BASTERDS (note even the different spelling), is apples to the original's oranges would be wrong though. It's more like comparing apples to sponges. Other than a World War II setting, these two motion pictures share nothing in common whatsoever (except for a supposed cameo by the original's star Bo Svenson but I didn't even see that!).

The movie had an odd effect on me and I'm not sure if I like it overall. The jury's still out. Essentially, there are three (or is it four?) different stories taking place and the one with Brad Pitt and his Jewish Nazi killer guerrillas is surprisingly NOT the main one. In Tarentino tradition, the stories all converge in the end but they really don't all mesh that well.

Throughout the film, major scenes are foreshadowed but then avoided leaving us to see only the aftermath. In other cases, we are NOT shown the aftermath of important scenes that we do want to see. There are amazing liberties taken with history that are unexpected but too over-the-top to be easily accepted. The disjointedness of the plot is perhaps unavoidable by virtue of the overlapping storylines. Even PULP FICTION had a trace of that but the flashiness there tended to cover it up better.

Story one deals with a young Jewish girl who escapes an SS Colonel. We later find her running a cinema in Paris and being courted by what appears to be the Nazi version of Audie Murphy, a war hero turned film star.

Story two introduces us to "the Basterds." This all Jewish group of Nazi-killers led by the very winning Brad Pitt with a Tennessee accent. We're introduced to them one by one but as a number of them don't last long, there seems no reason. Handsome Producer/Director/Writer/Actor Eli Roth stands out as "The Bear Jew" who beats a Nazi senseless in one of the film's few instances of Tarentino's trademark over the top violence.

Story three deals with an OSS plot to kill high ranking Nazi officials as they gather in Paris.

A thread that runs through all of these is a charismatic but sadistic SS Officer who may or may not have his own agenda.

In the end, none of those stories matter.

What matters with INGLOURIOUS BASTERDS is the filmmaking art. Although ultimately not as coherent as one might like, this is pure and enjoyable filmmaking, borrowing styles from everyone from Sergio Leone and various Italian and French directors to Leni Riefenstahl (who gets name-checked a number of times) herself.

The well-played opening sequence in which Col. Landa shares a friendly but tense visit with a farm family is strongly reminiscent of various spaghetti western sequences while the climactic scene in the theater reminds one of the great controversial documentaries of Riefenstahl. The pacing, direction, acting, lighting, photography and set design all are notable with even the colors seemingly chosen to fit each scene perfectly. Actor Christoph Waltz gives the standout performance throughout although Pitt's twang is fun to hear. When the ending comes after a long and leisurely paced buildup, it comes too quickly and we are shown nothing of what would most likely have been a weirdly fascinating retcon. I predicted the film's punchline about ten minutes before the actors got to it.

Bottom line--I enjoyed nearly all parts of this film...but I still can't decide just how much I enjoyed them when they were all strung together...but I'm pretty sure I still enjoyed the 1978 INGLORIOUS BASTARDS more.
Posted by Booksteve at 3:49 PM