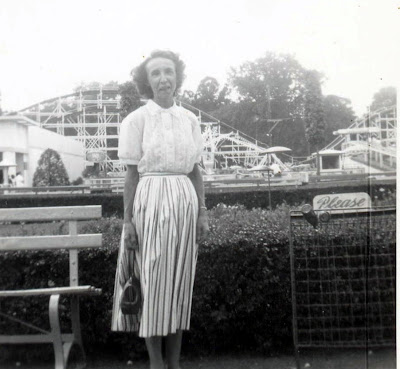 At left is a picture of my late mother, Maggie Thompson (not THE Maggie Thompson for all you comics aficionados) that was taken at Cincinnati's Coney Island amusement park (Note the "empties" Coke rack)some 7 years prior to my arrival on this planet.

Almost unbelievably, today marks the 95th anniversary of her birth! She was a simple country girl from North Carolina who had been raised in the cottonfields and met my father by one of those "Write to a Soldier" columns in TRUE STORY magazine during World War II. They corresponded for years and each would visit the other but they courted for more than a decade before they married in 1957. My mother was 43 at that time and in those days that meant way too old to have kids. No one told her that, however, and I came along about thirteen months after the wedding. Everyone who knew her during her pregnancy has said that it made her downright giddy and she laughed all through it.
As I said, she came from simple stock but she was a reader. Her all-time favorite book was LITTLE WOMEN and her favorite comic book character was WONDER WOMAN. Her favorite comic strip had long been FRECKLES AND HIS FRIENDS (of which you can find a nice selection here: http://ilovecomixfreckles.blogspot.com/ ). She always encouraged me to learn and she never stopped learning herself, either. Over time, she became downright progressive in her political and social beliefs (much to the confusion of my always conservative father) and always allowed me to make up my own mind on most things once I had all the available facts. Like any mother when pushed to her limit, she had her moments (and her switch!) but for the most part she was even-tempered and easy-going. Like any kid, I could be a monster at times but she never really made that much of a fuss. Right to the end, she loved her TRUE STORY, TRUE CONFESSIONS and TRUE ROMANCE magazines. Right to the end and now well beyond, I loved her. Happy birthday, mom. I still miss you!
Posted by Booksteve at 10:14 AM