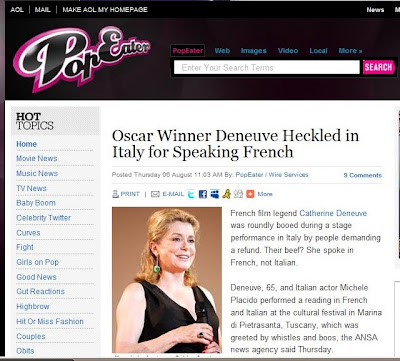 I used to have the big Academy Award winners memorized. I really did. I could tell you who, when and what for for Best Picture, Best Actor, Best Actress and maybe even some Best Directors. About 25 years ago, however, when I began seeing less movies per year, I fell out of the habit of learning the new ones and gradually even the old ones began to slip my mind if they didn't come up in conversation. That said, even I knew the minute I saw this that Catherine Deneuve, although quite the celebrated French film star, NEVER WON AN OSCAR!! She was nominated in 1992 for INDOCHINE but lost to one of my favorite actresses, Emma Thompson. To date that was Deneuve's sole nomination and a nomination is NOT a win! Dated early Thursday, as of five minutes ago, this post is still up with the above headline! As often happens, the comments are all dating site spam or political name-calling. Has no one noticed the error at all?

Posted by Booksteve at 8:36 AM